I’ve honestly never really been a big fan of driving. In the state of Virginia, you can get your permit at the age of 15 and a six months. You spend a certain number of months driving with a licensed adult and once you reach your 16th birthday and if you’ve passed your in-car assessment, you are free to drive. Well, I waited until I was about 16 and a half to start that process. Having a July birthday, I was already one of the last of my friends to be able to start driving, but by the time I could start, so many of them already had their full license that I looked at it as an excuse for why I didn’t have to.

I remember despising go carts growing up. I was never as good as my younger brother and I never won (and I like to win at things), so it was automatically something I avoided. And don’t even get me started on bumper cars. Within the first two minutes, I’d be the car stuck in a corner, getting hit from all angles. So, I think you can start to understand why I didn’t want to get behind the wheel of a real car, on a real road, with real drivers. I also knew that as soon as I went to the DMV and passed the permit test, my mom was going to make me drive home…and I just wasn’t mentally prepared for that!

My parents finally told me that I had no say in it and was going to get my license whether I wanted to or not (I think they were probably tired of driving me places since I was involved in so many different clubs, sports, etc. and it would also mean that I could start driving my brother to his various activities). I got a little Hyundai accent..base model, with no automatic windows or locks and I learned to actually enjoy driving…kind of. Any time someone else offered to drive somewhere, I never argued. I had no problem jumping in the backseat and letting someone else take that responsibility.

It’s not until something gets taken away from you that you realize how much you took it for granted…or how much you may have enjoyed it despite what you may have thought. This is my relationship with driving. No longer having use of my legs automatically ruled me out as a driver. (On the plus side, I no longer had to be the DD, but I think I’d take that role over having to depend on other people any day).

When I first got sick, I approached driving with the same attitude I always had…I don’t need to drive, other people can do it for me. Or making excuses saying that there was no way I’d be able to load my own chair… I even took it as far as to say that I didn’t need to learn adaptive driving because it wouldn’t be long before I could use my legs again. As time went by, my attitude started to change. I got tired of waiting for things to get better. I wanted to take control and I wanted my independence back in all aspects of my life….which included being able to get in the car whenever I wanted and go where I wanted to go.

It took about a year before I really got this process going. I was at the DC abilities expo last December when I met Tammy from DRCE–Driver Rehabilitation Center of Excellence. After telling her my story, she was so excited to get me behind the wheel. She has worked with a lot of wounded warriors, amputees (single, double, triple), and paralyzed individuals from Walter Reed and said that I just didn’t understand how much driving was going to change my life. I started to hear that from other patients as well, telling me that I was going to feel like I was 16 again, regaining my freedom…that analogy didn’t really apply to me and my prior experience with driving, but I understood what they meant.All it took was me agreeing to get behind the wheel for Tammy to start getting the process started. Since my license was completely revoked when I got sick (something about being hospitalized in the state of PA, the doctors are required to report serious illnesses to the DMV), I had to start back at square one. I studied for and took the DMV knowledge exam that teenagers take in order to get their permit, but this time, I wasn’t allowed to drive with just any licensed adult. I could only get in the car with an instructor that knew the hand controls.

I took a few lessons with Tammy and was really surprised at how easy the hand controls were. It seemed pretty natural. I remember being on the phone with Dusty after my first lesson and him asking me what it was like…”was it like driving a four wheeler? a motorcycle? a dirt bike?” I had NO idea what to compare it to because I’ve never driven any of those things! (I, again, have always ridden on the back of those vehicles). For me to say that it was easy and that I got the hang of it quickly really means that practically anyone can do it…seriously.

There are a lot of different kinds of hand controls. The ones I learned on were installed on the right side of the steering wheel and was a twist to accelerate and push to brake. There’s a knob on the steering wheel so I can make tight turns with just one hand. The hardest part for me was getting used to how touchy the brake and gas were, which really isn’t much different than the first time you drive any car.

I got my license a couple months ago, but had to wait for DARS–the department of aging and rehabilitative services for the state of Virginia–to pay for the controls. They cost almost 5K, so it was worth waiting for. There are a lot of portable versions and many cheaper kinds, but I was much more comfortable with the ones I was getting installed because they were exactly like what I learned on. I knew they were sturdy and dependable, unlike some kinds. I actually bought a pair of the cheap, portable ones to use in the meantime…I knew I’d want them just in case I had to drive someone else’s vehicle because they can go on any car…they just clamp onto the brake and the gas. These were good for short rides, but not something I wanted to use for long trips (like my rides to and from Philadelphia).

Well….after months of waiting, I picked up my car with the permanent hand controls on Friday!!! My mom has a Dodge Charger (a nice sleek, black Dodge Charger that she got when she sold her minivan as soon as both James and I were out of the house) and that’s the vehicle I modified. It’s perfect for what I need. The doors open a full 90 degrees, which allow for an easier transfer, the radio controls are on the steering wheel, there’s a gps in the car dash, there’s bluetooth to use my phone, and the back seat and trunk are large enough to accommodate my chair and other people. The doors opening as wide as possible makes the biggest difference to me. At first, it was the only way that I was able to transfer myself in and out of a car. I’ve gotten much better at car transfers since, but now the wide doors are what allow me enough space to disassemble and reassemble my chair when I’m driving by myself. (Fun fact: that’s why there are those dashed lines next to handicapped parking spots…for people like me who need all the space they can get to open the door wide and throw and 30inch wide chair out). I transfer into the car, then lean over and start taking pieces off my chair (there are a LOT of pieces that come off in order to get it in the car). I take the tippers off (which I still use because I haven’t quite perfected a wheelie without them and I’m pretty terrified of falling backwards without them on), the side guards that protect my legs from touching or rubbing against the wheels, the seat cushion, and the bag I like to keep on the back since I no longer carry a big purse over my shoulder. I take each of those things off and put them on the floor in front of the passenger seat. I then move my seat back a little and move the steering wheel in all the way (another great feature of this car is how movable everything is…the steering wheel goes up/down, in/out and the seats don’t just go front and back, they also go up and down). Then I fold the back of my chair down and take both wheels off (which I put in the back seat). Lastly, I take the big frame (all 25+lbs of it) and bring it across my body and into the passenger seat. Now, obviously, this doesn’t quite work if anyone is in the car with me, unless they want to ride in the back, but that’s when I take advantage of letting someone else disassemble it and load it into the back. It takes me about five minutes to do all of this, but it’s getting better every time…and I’m getting a little less bruised up each week.

(A little side note: my brother got in a car accident in my car shortly after I got out of the hospital and it has been un-drivable since…not that I’d really be able to use it now anyways since it is so small, but yeah, when it rains, it pours, and this was just another unfortunate event to add to the pile).

I’ve had a lot of people ask questions about my car or how I’m able to drive, so I thought it was a good idea to explain it and give everyone a better idea. Truthfully, I kind of like the hand controls even better than when I used my feet. It’s crazy how we don’t really appreciate things until we can no longer do them and driving was one of those situations for me (among many other things these days, but that’s a conversation for another day). 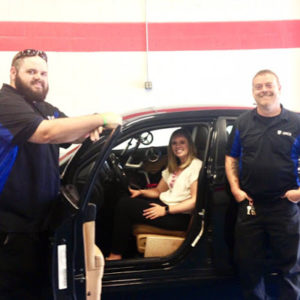 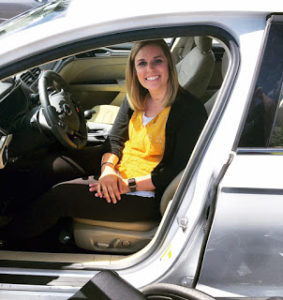 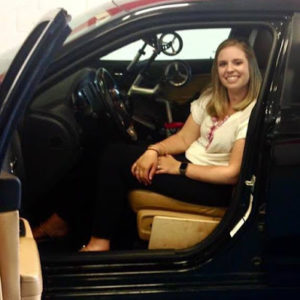 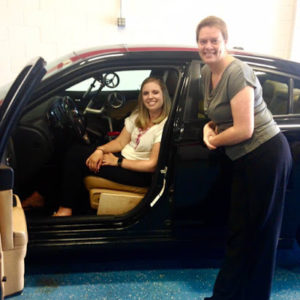 Allow us to create the best solution for your individual mobility needs.

Handicapped Parking is a Necessity, not a Luxury by Kelly Morse

Driverless vehicles are coming!
Scroll to top
Share This